The Villains
One More Time 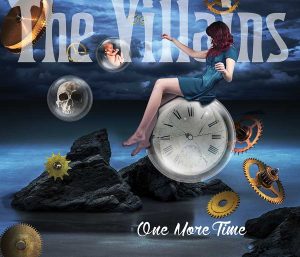 “The goal was to make the greatest rock record of all time,” The Villains own Dan Call says, when discussing the motivation behind writing and recording the band’s new album, One More Time. “We didn’t want to leave anything on the field. Every song had to be as strong or stronger than the one before it.” Then with a short laugh he adds, “Now it’s up to the universe to decide.” Certainly, no one would accuse The Villains of not being ambitious. Mention the bands lofty hopes of creating a ‘tour de force’ to any fan or music industry insider and they will all tell you the same thing: “They just might do it.”

From the opening track ‘Love Is’ to the funk inspired rock of first single ‘Believe In The Music’, One More Timeis a blistering ten song statement that rock is still alive and well. Sometimes referred to as ‘America’s Greatest Rock Band’, The Villains have carved out their place with passion, hard work, and a dedication to deliver music and a live show that their fans deserve, all the time…every time. One More Time takes the band to the next level as evidenced in the songs, vision, and production.

The Villains mantra has always been the same; “write great songs, make great records, and never forget who you’re making them for,” a formula that’s served them well. All five members (Magno, Jimmy James Schmitt, Dan Call, Sean McNally, and new member, Richard Gibson) have recorded and performed with many mainstream and indie artists from Nashville to New York, as well as touring the world together and individually. What started as a recording project for Magno, Dan, and Sean after three years on the road, quickly turned into a record that would eventually become their debut. Jimmy James Schmitt was invited in to round out the group and in the spirit of classic multi-vocal acts such as The Band, The Eagles, and Fleetwood Mac, the blend of different singers and styles created a solidifying, contemporary sound: unique and uncompromising.

Their 2010 debut album, Just Another Saturday Night, yielded two Triple A Top 40 singles ‘Let’s Forget About It Tonight’ and ‘You Don’t Have To Say’, garnering much critical success. In 2012, they released their second record Velocity, produced by Stan Lynch (Tom Petty and The Heartbreakers, Don Henley) and Billy Chapin (Backstreet Boys, Edwin McCain). The record produced two Adult Contemporary Top 25 singles, ‘(My) Rainy Day Girl’ (#23) and ‘Don’t Know A Thing’ (#25). They then capped the year off with the Top 40 Holiday Chart single, ‘Christmas Is Where You Are’. Their next release, 2014’s A Little Something For The Pain, again produced two Adult Contemporary Top 25 hits, ‘The First’ (#22) and ‘It Rained Everyday’ (#22). As if that wasn’t enough, the records third single, ‘Save The World’, became the bands first Adult Contemporary Top 20 single! 2016 ended with a new Holiday Top 40 single, ‘Santa Claus Is Coming Tonight’.

The Villains plan to continue their rise in 2017 by getting out there with the people that matter most, their ever growing legion of fans. Touring and sharing with them what they know is their strongest work to date, their brand new record… One More Time available Worldwide July 14,2017 The first single from the highly anticipated  One More Time, ‘Believe In The Music’, was released in May 2017 and has already achieved great success on the Billboard AC chart.